This “Thunder Blue/Metallic Gold” colorway derives from the Japanese anime franchise Gundam, particularly from the Mobile Suit Gundam Unicorn, a novel from the Gundam universe in celebration of its 15th anniversary. To further encapsulate the theme, the model bears a distinct logo printed on the heel, followed by geometric Swooshes that are interchangeable as a nod to its toy counterpart. Finally, the paneled aesthetic throughout the upper reflects the style of the Gundam suit to round out the design. 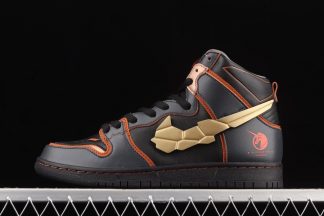