Starting out with its upper constructions, the majority of its base alternates between tumbled leathers and hairy suedes, the former of which affixes to the toe boxes, ankle flaps and throat overlays while the latter costumes the quarter paneling and toe tips. This entire piece is predominantly hued in “Fauna Brown” but comes coupled with additional shades of “Rustic” and “Velvet Brown” accents. From there, a smorgasbord of interesting ornamentations are brought to the table here including the tortoise shell jeweled Swooshes, debossed “Bodega” branding on the medial quarter, and the exposed leather stitchings that poke out across the liners, loop through side walls and appear tied up on the heels. Being that Bodega was founded in the city of Boston – a city famously known for its fiery passion for the Red Sox – the exposed stitches are employed to resemble a baseball glove.

Nestled on the interior are tongues that feature “Bodega” and “Hidden In Plain Sight” spell outs, both of which are finished with golden skins, hidden stash pockets as well as red insoles and gilded Nike logos. Moreover, red bandanas that print out the years 2006 and 1972 – the years in which both brands were introduced – will be included with the kicks. 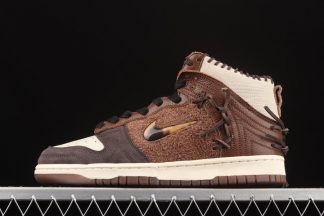