This high-profile installment leans on glossy overlays and minty color-blocking to guide its overall design. The former is shown off via the black patent leathers overlapped across the base layer which also come treated with tonal psychedelic patterns throughout. Swooshes atop the lateral and medial walls are also given the same aesthetic. From there, it’s the “Barely Green” hue that takes over and spills onto the tumbled leather toe boxes, quarters and ankle collars, as well as on the laces and NBA All-Star Indianapolis badges attached to the lower lateral heel.

Neutral tones make their way to the pieces that reside down under, the midsole showing up in a crisp white while the treading is flooded in pitch black.

Later on, the Air Jordan 4 Red Thunder will also hit the shelves. 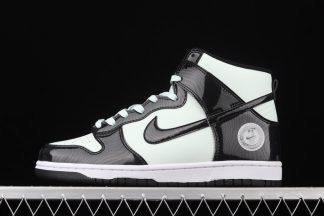