To honor the tasty dessert, Quartersnacks reimagines the SB Dunk Low with black and white zebra patterns across the toe boxes, quarters and collars. Black overlays, shoe strings and Swooshes then get brought in for some understated contrasting. Nike SB branding is positioned on its usual tongue and insole locations in a bold red hue, but it’s been slightly modified with the Quartersnacks moniker underneath instead of the traditional “Nike SB Dunk Low” spell out. In addition, the shoes call out the mag’s Big Apple origins as its lateral heel Quartersnacks logo is a remixed version of the Nike NYC emblem that was originally designed by John Jay. “Sail” midsoles and stark black treading round off its entire look. 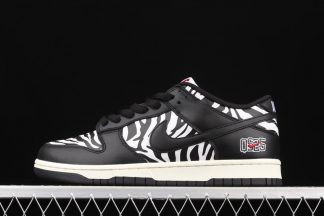