The shoe is slated to arrive in a Canteen/Lemon Frost colorway. This color scheme is the same as one of four UNDEFEATED x Nike Air Force 1 InsideOut Priority colorways that released in 2006, which has us believe that this Dunk is a direct tribute to that AF1. The AF1 featured a brown upper with Lemon Frost Swooshes and “ONYOURFEETKID” branding on the midsole. 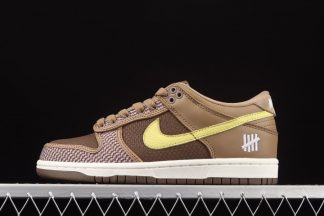