The Air Jordan 5 “Raging Bull 2021” is the first-ever standalone release of one of the most popular non-original Air Jordan colorways. The “Raging Bull” or “Toro,” as it’s also referred to by sneaker collectors, was originally released in 2009 as part of a limited edition “Defining Moments Pack” that dressed Michael Jordan’s fifth signature shoe in two styles: An all-red suede look and a reflective black design. Packaged inside of a shoe box mimicking a wooden crate, the “Defining Moments” Air Jordan 5 bundle remains extremely desirable to this day. As for the design of the modern re-release, Jordan Brand dresses the upper in a fiery shade of supple Varsity Red suede. Clear netting can be found on the mid-panel and tongue. The model’s silver reflective tongue is inspired by the look of the original Air Jordan 5 “Fire Red – Silver Tongue.” Like the OG “Raging Bull,” the modern incarnation displays a black embroidered Jumpman on the tongue, a tonal “23” logo with black outlining on the lateral side, and a black Jumpman on the heel. The clear lace lock and red laces are a nod to the first “Raging Bull.” Underfoot, the black painted midsole features red-and-white shark tooth detailing and a clear Air unit in the heel retains the Jordan 5’s original design.

In other news, Air Jordan 12 Twist is coming later this Holiday season. 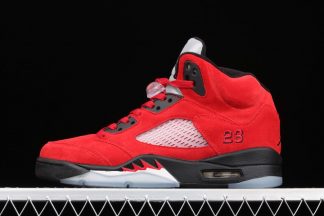