The Air Jordan 5 “Stealth 2.0” is a modern reinterpretation of the popular non-original colorway of the model that was originally released in 2006. The first “Stealth” Jordan 5 debuted during a time period in which Jordan Brand was re-imagining its core classic Air Jordan models as “lifestyle” shoes by arranging them in materials and colors that could be worn off the court. The look of the “Stealth 2.0” is quite similar to the original “Stealth” design from 2006. Both feature a crisp white leather upper with translucent netting on the mid-panel and tongue. The “Stealth 2.0” displays a black embroidered Jumpman on the heel, differing from the blue Jumpman logo on the original ’06 release. The other main difference is found on the midsole. Both releases feature a grey midsole, but the new “Stealth 2.0” includes black “shark tooth” detailing speckled with blue. The original design features solid blue shark tooth accenting. An icy blue translucent outsole rounds out the look of the shoe. 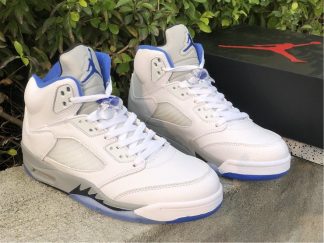