Nike expands its ‘Have A Good Game’ collection with the Air Force 1 Fontanka. The model is an updated version of the Air Force 1 and is completely transformed into a gaming pair.

With the ‘Have A Good Game’ collection, Nike brings the world of gaming and sneakers together. The collection consists of a number of different pairs which include the Blazer Mid and the LPL x Nike Air Force 1 Pixels. The nice thing about this selection is that each pair carries the same elements, so we can easily recognise the ‘Have a Good Game’ kicks.

The Air Force 1 Fontanka Have a Good Game features a colour scheme that perfectly matches the previous pairs in the collection. The sneaker has an all-white base to better support the coloured accents. A white tag can be found on the tongue, with three Swooshes printed on it in green, purple and pink. 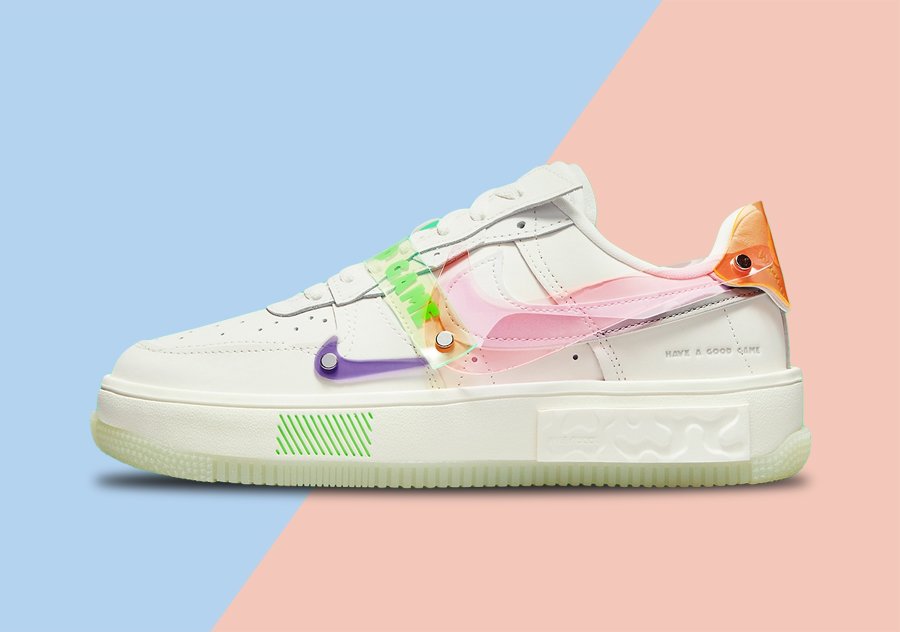 The heel is emblazoned with “Have A Good Game”. The left and right shoe are distinguished from each other by the symbols on the heel tab. On the left shoe, a world is depicted. The right shoe features a Nike Swoosh.

The remarkable thing about the sneaker is of course the translucent neon accents in the colours orange, purple, green and pink. These elements can easily be removed from the model. The accents can also be replaced with other colours.

We find an extra translucent Swoosh over the normal Swoosh on the middle panel. Over the laces, a neon green band can be found, which reads “Have a Good Game”. There is also an additional neon Swoosh on the front of the sneaker. The heel tab is also covered with a translucent accent.

Yet Nike adds an extra surprise to the pair. The midsole and outsole of the sneaker are both white, but when the lights go out, it’s a different story. The outsole lights up in the dark and matches the neon green accent on the upper.

In other Swoosh-related news, the Air Max 97 Purple Bullet is coming this week. Are you ready?